Met.3D is developed at the Regional Computing Center of Universität Hamburg and at the Computer Graphics & Visualization Group in the Department of Informatics of the Technical University of Munich (TUM), Germany. Since 2015, we receive ongoing funding from the German Research Foundation (DFG) within the Collaborative Research Centre SFB/TRR 165 Waves to Weather. Previously, the development was partly funded by the European Union under the ERC Advanced Grant 291372 SaferVis and the ERC Proof-of-Concept Grant "Vis4Weather".

Met.3D is intended to be used as a visualization framework in the atmospheric sciences, as well as to facilitate research on visualization in meteorology. We have released an open-source version of Met.3D on Gitlab, in addition, experimental research code has led to a number of publications. If you are interested in some of the methods described in the publications, please contact us.

We hope you find the tool useful for your work. Please let us know about your experiences.

A new version 1.7 is available, improving map projection support, and adding computation of relative humidity and colouring of trajectories by an auxiliary variable. 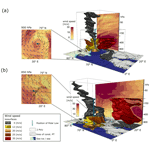 A new version 1.6 is available, adding a simple batch mode, improvements to the user interface, as well as a number of bugfixes.

A short newsletter article about our 3D weather forecasting session at the Cyclone Workshop 2019 has just appeared in the recently published ECMWF Newsletter Vol. 162. The article can be read online here, the full PDF of the Newsletter is available here.